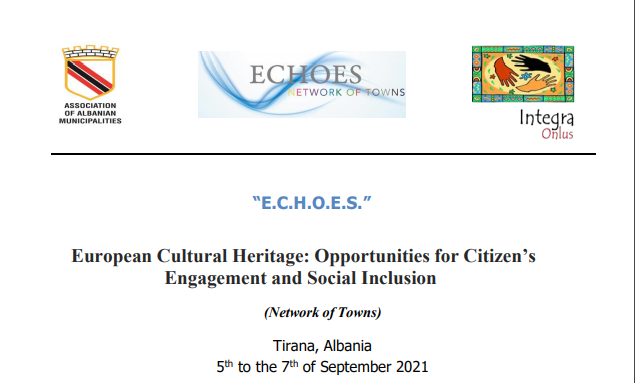 “ECHOES-European Cultural Heritage: Opportunities for citizens’ Engagement and Social Inclusion” is a Network of 18 partners from 13 EU Countries + AL,RS and FYROM, which stems from the belief that the creation of a Community Cultural System (CCS) can assure a fruitful and stable cooperation between Local Authorities and CSOs from the Cultural and Social Sectors, working together for social inclusion of migrants, Roma, mentally or phisically disabled people, Neets and vulnerable groups in general, through the valorization of the Cultural Heritage.

About 300 direct participants from 5 LAs, 1 National Association of LAs, 1 Chamber of Commerce, 1 non formal Training Provider, 1 Local Action Group and 9 NGOs from the social and cultural sectors will take part to the 6 International Meetings planned.

An initial research on the impact the “2018 European Year of Cultural Heritage” had on each partner community will be carried out by every organization, whose role will be also to organize 2 Community Activities, for involving the hard-to-reach groups and citizens, non usually involved in Insititutions/NGOs, in the debate about the future of Europe and its Social and Cultural Policies (by using the Street Debate and other non-formal methodologies).

“My Culture, My Europe, My Future” will be the campaign the partnership will implement for giving its disadvantaged citizens the opportunity to have their say at local and EU level about their vision of the Future of Europe from two points of view: Social Inclusion and Cultural Heritage. The results of the 2 initiatives of this campaign (“European Cultural Heritage-tell your story!” and the “Europe, Heritage ,Start up!” contest), will be collected and will flow into the Final Recommendation to be addressed to the relevant EU and local decision makers.

The Dissemination plan together with the working methods will assure ECHOES a wide impact and will affect more than 50.000 indirect participants.

Tirana is the capital and the largest city of Albania with a population of about 1.000.000. It is located in the center of the country, enclosed by mountains and hills with Dajti mountain rising to the east and a slight valley to the northwest overlooking the Adriatic Sea in the distance.

Due to its location at the Plain of Tirana and the close proximity to the Mediterranean Sea, the city is particularly influenced by a Mediterranean seasonal climate. It is among the wettest and sunniest cities in Europe, with 2,544 hours of sun per year.

You can find further information about the airport at their official website: https://www.tirana-airport.com

From the airport, Tirana can be reached by bus, taxi or by your private car.

If you travel by bus with the ticket fare, the price is 1,2€ till the center of Tirana.

You can also reach the city by Taxy. The price to the hotel should be around 15€. This cost will be covered by AAM. AAM is going to organized your picking up and bringing back to the airport.

Each PARTNER must consist of 1 participant to the event of Tirana on 5-7 September.

The working language of the event will be English.

Accommodation and costs related to the activity will be covered directly by the project.

The following meals will be covered directly by the project: Dinners – Breakfasts – Lunch. (AAM will be responsible)

All the participant’s personal costs (like other meals not listed above, telephone calls, gifts and souvenirs, etc.) and/or any other cost not linked to program’s events will be the responsibility of the participants and will be settled directly by them on the spot.

The Campaign is shared in 2 parts:
1/ “Tell Your Story!” – a collection of stories about the local cultural heritage; the target group is made of young citizens, better if under 18, kids and teenagers are very welcome. The idea is to collect stories (real stories, legends, rhymes, lyrics, songs, ….) the citizens know or have heard in the past, e.g. by grandparents, which could be presented as an example of valorization of tangible, intangible, natural cultural heritage. Through these stories, the local cultural heritage is preserved and handed down from generation to generation. Each partner should collect minimum 2 stories. Deadline: 30 August 2021. These stories will be presented by each partner during the meeting in Albania, 5/7 September 2021.

2/ “Europe, Heritage, Startup!” – a collection of possible initiatives, business start-ups, projects for the valorization of local heritage, tangible, intangible, natural, and digital. This activity is mainly targeted at young people 18+, with the intention of involving them in the process of the building of a better EU, where the cultural heritage is the engine that boosts youth engagement. The young citizens can take part in groups of up to 5 members and they can choose one element of their local heritage (an ancient abandoned building, a traditional handcraft process or traditional folk music almost forgotten, and so on….) and think about how to give it/them a new life, valorizing it/them and values/stories it/them bring. Partners should collect minimum 1 initiative. Deadline: 30 September 2021. There will be selected 5 initiatives in total and the representatives of the selected projects will be invited to attend the ECHOES meeting in Munich (DE) 8/11 November 2021, where the teams will be supported in the development of their ideas/projects for the valorization of the local cultural heritage.

The lek (sign: L; code: ALL) is the official currency of Albania. It was formerly subdivided into 100 qindarka (singular qindarkë), but qindarka are no longer issued. Even though the euro is widely accepted; you’ll get a better deal for things in general if you use lek.

Should you have any questions, please do not hesitate to contact Klea Kambo, the finance manager and Project Coordinator of the Association of Albanian Municipalities, as below:
Email: info@aam.org.al
Office number: 042468492
Mob. +355697747447 (WHATSAPP)